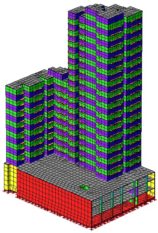 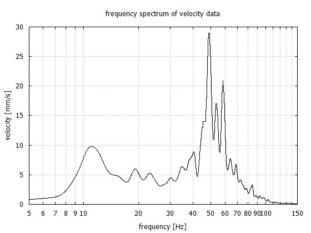 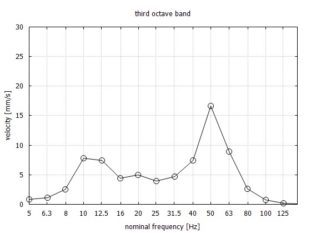 A metro line is passing nearby a high-rise building. The ground borne vibrations and ground borne noise levels in each storey had to be calculated and evaluated. Based on the findings, a vibration isolation system (VIS) was proposed, and the vibration and noise levels were re-calculated for the vibration isolated building in order to determine the achieved insertion loss and hence, the effectivity of the applied Isolation system.

The wave propagation through the soil to the basement of the building was calculated by a finite-element-model using PLAXIS 3D and its Dynamics Module. Acceleration time histories due to passing metro trains, recorded on the ground surface, were used for the calibration of the soil model. The time history of the ground acceleration at the basement walls served as input data for the 3D Finite-Element-Model of the high-rise building. The calculation of the storey slab vibrations and the ground borne noise levels was done by using the direct integration method. The evaluation of the results was done according to ISO 2631-2:2003 and the relevant local codes.