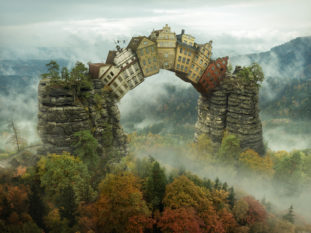 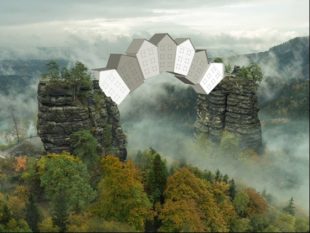 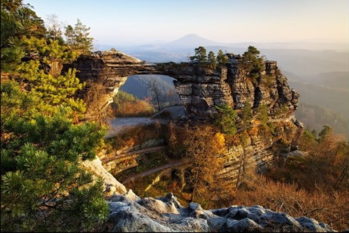 Erik, can you tell us a bit about how you made this photo?
I photographed this one a couple of years ago in an area in the north of Czech Republic called “Bohemian Switzerland”. It’s an area with lots of sand stone and interesting shapes, I photographed it right after the rain and therefore you have the very interesting cloud shapes over the forest.
I got the idea of creating a society that is supporting each other, like the arch when you remove one piece the whole structure fail. But if it’s untouched it stays very strong without much effort, much like the society we need to support each other. So, I set out to photograph all the houses after shooting the mountains and background. I knew I had to shoot them in very specific perspectives so I sometimes had to go up in towers around Prague to get the right perspective and for some of the others I should shoot it more from below. In total the houses are a mix of houses from Czech Republic and Stockholm old town. From left to right: Czech, Czech, Sweden, Czech, Sweden, Sweden, Sweden.

Nice thing is that our practice is called “convex”, and this arch of yours is in somewhat in our logo. And the arch is a principal element for a structural engineer. And your idea of creating a society that supports each other, is the idea how we as a team to work together… It fits somehow…
Yes, that’s fun! It does sound like a perfect fit! This is what the first sketch of the image looked like, I drew the buildings in to get an idea of how I needed to photograph them and follow the perspective correctly. I actually have an engineering background myself in computer engineering, so I’m very interested in this sort of problem solving, but I just studied engineering (at Chalmers University of Technology in Goteborg), I never worked as an engineer.

indeed. One question: the two “supporting mountains”, are they in reality standing close by each other – or are they placed by you in such way?
Yes and no, there are two pillars next to each other but the left side of one of them is somewhat attached to the rest of the mountain next to it, so the right pillar is free standing in the environment like that, and the left one is partly free but I had to change the left side of that pillar to make it more free like the way I wanted. there is an image of what it looks like there but from a slightly different angle. There is a bridge like part connecting them and that is what gave me the idea of having houses squeezed in between them instead.

I see. And then you had to “deform” the houses such, that they are like bricks in a vault, I guess?
Yes, exactly, I had to make them slightly cone shaped to fit together, I tried to not make it overly obvious but when you know it you see it.

A signed, large fine art print (180 x 135 cm) of “Self-Supporting” by Erik Johansson can be seen in our practice.