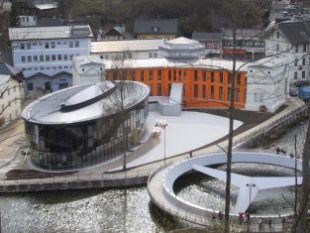 In the course of the Styrian Regional Exhibition 2005 in Bad Ausee the long time abandoned spa house was selected as exhibition building. The project had two parts: the revitalisation of the existing spa house and a new building in the east park.

In the old spa house, the east outer wall was completely removed and re-built up to the adjacent risalits. The roof construction was also completely dismantled and replaced by a new roof. Out of this situation, in the area of the middle risalit, a difficult and complex situation arose: the cupola, that was attached to the dismantled roof was completely preserved. The elliptically formed new building was designed in a flexible manner such that it can be used both for the exhibition and for subsequent use. To achieve this flexibility, the building was stiffened only by reinforced concrete columns and the staircase from ground level to upper level. This made possible that the inner walls could be placed independently from the structural system.